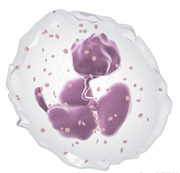 Neutrophils are a key type of white blood cell found in our bodies and play a vital role in fighting infection, which in their mature form are able to attack and destroy bacteria, toxins and foreign substances that can make us sick. Neutrophils counts are usually maintained within a normal range by the body. However, if the level of neutrophils increases, potentially serious problems are taking place, of which treatment may depend on the root cause.

The mature neutrophil makes up 50-70% of the total number of white blood cells found in the blood. When the number of neutrophils increases beyond normal amounts, there might be an indication of diseases as follows.

Having an elevated neutrophil count in itself does not generally produce symptoms. The underlying mechanism triggering neutrophilia is responsible for any symptoms that a person may experience.

Treatment of high neutrophils is always directed at the underlying cause or trigger.