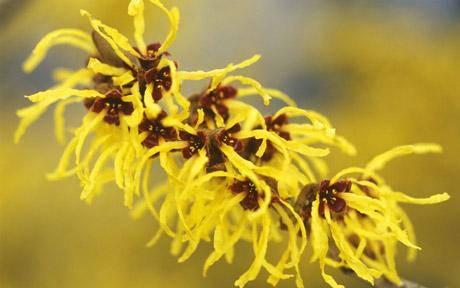 Benefits and Uses of Witch Hazel

Witch hazel oil or extract is applied directly to the affected skin, or it can be diluted with isopropyl alcohol, arnica oil, water, or olive oil. Avoid applying witch hazel to open wounds.

By combining with certain herbs, witch hazel can be an effective treatment for stomach flu, diarrhea, colitis, dysentery, irritable bowel syndrome, and other gastrointestinal ailments.

To relieve uncomfortable symptoms, make an herbal tea using 1 teaspoon of mint, chamomile, thyme, and witch hazel in one quart of water. Bring to a boil, then let simmer for approximately 5 minutes. Pour one cup of tea and sip throughout your day and refrigerate the remainder.

Witch hazel contains tannins, flavonoids, and other compounds that may assist in healing and constricting the inflamed and injured blood vessels that result from hemorrhoids.

Simply take 1 teaspoon of witch hazel extracts, and brew it via boiling in a cup of water for 15 to 20 minutes, then you can enjoy a cup of witch hazel tea. After a bowel movement and before bed, dab cotton balls, gauze squares, or clean cotton cloth into the tea and put it to the affected area for 2-3 minutes, then repeat this process for 10 to 15 minutes using a fresh compress. Regular and repeated treatment should allow witch hazel’s antibacterial and anti-inflammatory properties to help decrease the swelling and discomfort.

Witch hazel can help soothe and heal the perineal area after tearing or an episiotomy while giving birth.

Simply apply several drops of witch hazel extract onto a clean feminine pad before placing it into your undergarment. Alternately, you can place 5-6 drops of witch hazel oil into a squirt bottle full of warm water and use this solution to cleanse the perineum after urinating or defecating.

Some studies have shown that witch hazel’s polyphenols and other components may be effective in the treatment of varicose veins.

Simply make a solution of 1 cup lukewarm water mixed with 10 to 15 drops of witch hazel oil. Soak a clean cloth in this solution, and then apply it like a compress to the affected veins. Allow the affected veins to soak under the compress for 10-15 minutes while keeping the legs straight and elevated.

Witch hazel assists in the control of bleeding and can be used topically for wounds or internally for bleeding ulcers or bleeding gums. Naturally, serious wounds or excessive bleeding require medical intervention, but witch hazel can be useful for minor cuts and scrapes.

Witch hazel helps to dry the secretions caused by swimmer’s ear, which is associated with moisture and pus in the outer ear canal. Simply dip a cotton swab into a tea of witch hazel, goldenseal, and calendula and apply it to the outer ear.

Witch hazel has long been used to prevent and treat diaper rash. Simply apply witch hazel oil or diluted tea of witch hazel to the affected area during diaper changes.

There are many usage forms for witch hazel, including a tincture, a tea, and a lotion.

Side Effects of Witch hazel

Witch hazel has been approved by the FDA as an herb for medicinal use. There are no known side effects from using witch hazel.

However, there is a risk of allergic reaction with an oral overdose. Symptoms include rash, itching, inflammation, difficulty dizziness, breathing, upset stomach and/or nausea.

As a result, oral consumption of witch hazel should only take place under the supervision of a healthcare provider. If you experience any of the above-listed symptoms, go see your doctor immediately.