What Happens During a Stroke? | Healthcare-Online

What Happens During a Stroke? 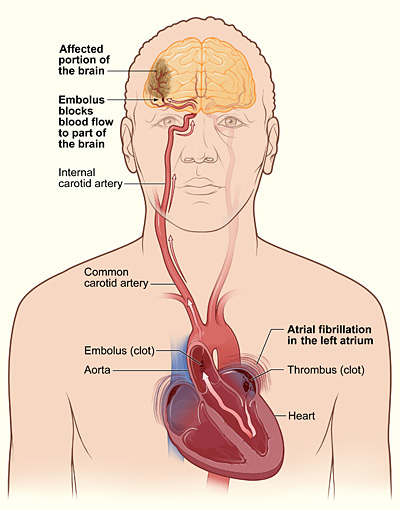 Termed simply as a brain attack and medically as a cerebrovascular mishap, a stroke is a medical condition in which depravation of oxygen is experienced by a portion of the brain. Such a condition can happen if damage is suffered by the artery responsible for supplying blood to the brain. The brain cells cannot live without oxygen and start dying immediately due to the lack of oxygen. The extent of the damage suffered during a stroke increases if the brain is deprived of oxygen for a long period of time.

What Happens During a Stroke?

Strokes usually occur because of a disruption of blood flow to the brain. This causes death of the brain cells as they do not get the nutrients and oxygen they need to live. If the blood supply is not restored quickly enough, serious or even unrecoverable damage could happen to the brain. What happens during a stroke? The following are some of the indications that say you are having a stroke:

Watch a video about what happens during a stroke:

Effects of a Stroke

What happens during a stroke? Damage happens. A stroke can cause permanent damage to a person’s health and can temporarily affect some of his functional capabilities. It all depends on how much brain tissue gets damaged during the oxygen deprivation and also on the side of the brain where it takes place. The common effects that a stroke can have on a person’s body include:

Risk Factors of a Stroke

How to Prevent a Stroke

Now that we have known what happens during a stroke and the damage a stroke can cause. We should spare no efforts to avoid a stroke from happening. Adopting a healthy lifestyle is among the key things that can be done for preventing the risk of having a stroke.

However, don’t start any exercise regime before consulting the opinion of your doctor.