In the US, around 5,000 cases of snake bites are reported each year according to the Wexner Medical Center at Ohio State University (Wexner). Snake bites should always be considered a medical emergency and treated as such because bites of venomous snake can be lethal. Bites from non-venomous snakes can be dangerous too as they can lead to an infection or allergic reaction. A number of symptoms can occur because of snake bite poisoning like paralysis, convulsions and pain. Let’s have a look at some poisonous snakes and see how their bites can be treated.

Snake bite poisoning from a Belcher’s Sea Snake is really bad news because it is the most venomous snake in the world. It is usually docile in nature and is found in the waters of Northern Australia and South East Asia.

Physical Appearance: It is faint-banded having a size ranging from 0.5 to 1 meter. It has a thin body and has chrome yellowish coloring with dark green crossbands.

Toxicity: A few milligrams of the venom can kill 1,000 people. However, less than a quarter of the bites contain venom. 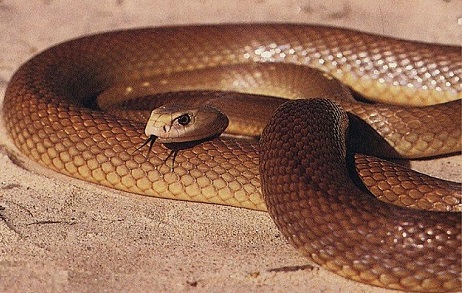 The Inland Taipan is the most venomous land snake in the world. It has a reclusive nature and is usually found in remote locations far away from human reach.

Physical Appearance: It has a dark tan color which turns to brownish-green in summers. It is around 1.8 to 2.5 meters long and has a fang length of 3.5 to 6.2 mm.

Toxicity: Its one bite can contain up to 110mg venom, which is sufficient to kill 100 human beings or 250,000 mice! The poison is so fast-acting that it can kill a grown man in less than 45 minutes.

The Black Mamba is among the most feared and aggressive snakes in the world that can move at a speed of 20 km/h. It is found in many parts of Africa.

Physical Appearance: It is not black in color and usually has an olive-brown or gray coloration. It is a round-bodied, slender and an extremely large snake that has a length of around 2 to 3 meters.

Toxicity: The venom is a fast-acting neurotoxin that causes moderate local pain in the affected area which progresses to tingling in mouth, double vision and ataxia very quickly. Without antivenin, death can occur anywhere between 15 min to 3 hours.

Tiger Snakes are mostly found in Australia. It usually flees when encountered by humans but can become aggressive when cornered.

Physical Appearance: It has a mix coloration composed of yellow, olive, jet-black or orange-brown. The patterns covering the body are dark bands of contrasting or indistinct colors. The length of this snake can go up to 2.9 meters.

Toxicity: The venom is a powerful neurotoxin that causes localized pain in neck and foot accompanied with tingling and sweating which rapidly progresses to paralysis. Death from a bite takes about 6 to 24 hours.

The Philippine Cobra is the most venomous species of cobra in the world that is native to Philippines. It can spit its venom for up to 3 meters.

Physical Appearance: It has a light to medium brown color and is usually around 1 to 1.6 meters in length. It is a stocky snake having long cervical ribs that can expand resulting in the formation of a hood when it is threatened.

Toxicity: The venom is also a neurotoxin which affects the respiratory and cardiac function, causing respiratory paralysis and neurotoxicity. The initial symptoms include nausea, headache, diarrhea and vomiting. 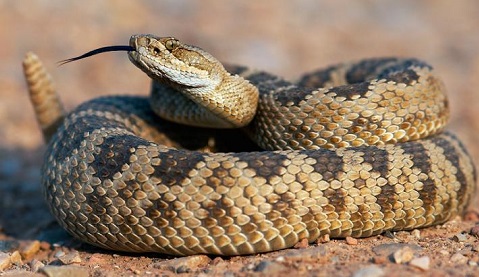 Rattlesnake is a part of the viper family that is capable of striking up to ⅔ of its body length. It is native to the Americas. The juvenile rattlesnakes are much more dangerous that adult ones.

Physical Appearance: It is easily identifiable because of the rattle at the end of its tail. It has a subtle earthy color which helps it in blending with its environment. There are intricate patterns on the skin as well which camouflage it from predators.

How to Treat Snake Bite Poisoning

If you suspect the snake bites you is venomous, the first thing to do is call 911. If the snake is not venomous then treat the wound as a puncture wound. Remember to check the appearance of the snake so that you can explain it to the emergency staff.

While you are waiting for the medical help to arrive, you can: