Cervix is the lower part of the female genital tract that links the uterus to the vagina. Any abnormal growth or malignant transformation in the cervical lining cells can lead to the development of cervical cancer. The main difference between a healthy cell and a cancer cell is that the former multiplies with a set rate and dies after a certain time; whereas the latter breaks both of the rules. These cancerous cell continue to accumulate, finally they may form a mass or tumor. In long-standing or poorly managed cases, the tumor cells may break off and invade surrounding tissues. However, patients can get rid of cervical cancer, if it is treated properly, especially diagnosed in the early stages. 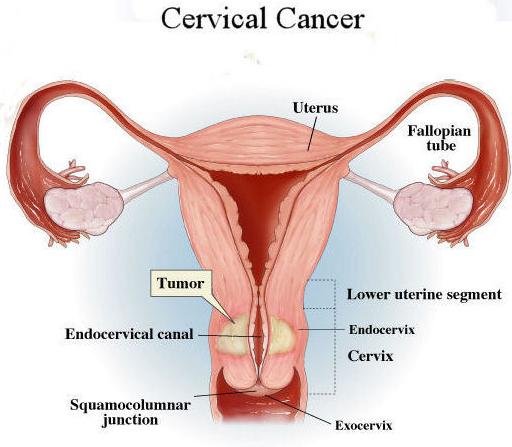 The general cervical cancer symptoms include:

Cervical cancer tends to begin when the healthy cells converts into an abnormal cell which is mainly due to genetic mutation. Although the exact cause for cervical cancer is still unclear but there are many risk factors that may make you vulnerable to it.

How to Diagnose Cervical Cancer

If you think you have shown some cervical cancer symptoms, then there are a lot of tests to go through in order to confirm it. The following are the common ones:

Pap test is the routine screening test that deals with the detection of abnormal cells on the smear. It is considered as the most important tool in finding and treating cervical cell changes. Pap test schedule is based on your age and specific conditions, so one may have to consult the doctor first.

The doctor will take your history and perform physical exams and other tests make a definite diagnosis.

Hysterectomy, in which uterus is removed initially to treat the early stages of cancer. There are two distinct procedures in the medical practice; which are:

Radiation therapy can be given alone or in combination with chemotherapy, before surgery to reduce the size of the cancer or tumor. Side effects of radiation include sudden stoppage of the menstrual cycle and women may enter into menopausal phase.

At the time of consultation with your doctor, make sure to ask all your questions and queries. You can make notes before any appointment with the doctor or you can take your friends or family members for assistance.

Friends and family may provide the much needed care and support while you are fighting cancer. It helps to regain your energy that you talk with your familyand friends whenever depressed or alone, or ask them for support in daily tasks such as cooking and child care helps.

People who have already suffered from this disease and came up as a survivor may serve as motivational inspiration and for you to fight your illness. You should talk to them in order to take some recommendations and supports.

Spending time with your friends and family is good but don't forget to give yourself some time. Spend that time in listening music, writing any article, gong for a walk, this will relax you and gives you strength to fight against cancer.

Here is an informational video to learn more cervical cancer: