A malignant tumor that forms in the prostate gland of male reproductive system is called prostate cancer. It is made up of adenocarcinoma cells most of the time, which are cells that come from glandular tissue. Cancer cells are named in accordance with the organ where they originate, no matter where in the body they are found. Prostate cancer is the most seen kind of cancer which grows in men other than skin cancers, and the second leading cause of deaths from cancer in men. This cancer can be divided into four stages according to its severity. 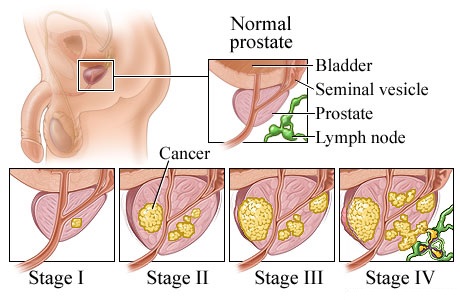 How to Distinguish Prostate Cancer Stages

A standard way for a cancer care team to describe how far cancer has spread is by using a staging system. The American Joint Committee on Cancer or AJCC, TNM system is the most commonly used when it comes to distinguish prostate cancer stages.

There are two types of staging, one being the clinical stage which is the best guess of your doctor of the extent of your disease which is based on the results of a physical exam, prostate biopsy, lab tests, and any kind of imaging tests you’ve had.

Your doctor can determine the pathologic stage if you have surgery, and this is based on the surgery and examination of the tissue removed. Therefore if you have surgery, the stage of your cancer may change after the fact, like if the cancer was found in a location not expected. Pathologic staging is most likely to be more accurate than clinical staging, since it lets your doctor get an impression firsthand of how bad your cancer is. This is just one advantage to having surgery instead of active surveillance or radiation therapy.

There are five pieces of information which this system is based upon, including the PSA level at the time of your diagnosis, the extent of the primary tumor, whether or not the cancer has spread to nearby lymph nodes, the Gleason score which is based on prostate biopsy, and the presence or absence of distant metastasis.

Watch a video to know more about how to distinguish prostate cancer stages:

A way describing where the prostate cancer is located is called staging. The TNM system (T for tumor, N for node, and M for metastasis) is one particular tool that doctors use to describe prostate cancer stage. These 3 factors are what doctors look at to figure out the stage of the cancer.

Treatment for Prostate Cancer by Stages

There are several different options for treating prostate cancer and plenty of influencing factors which affect your options of treatments. The stage of your cancer, however is one of the most important factors when you are choosing your treatment.