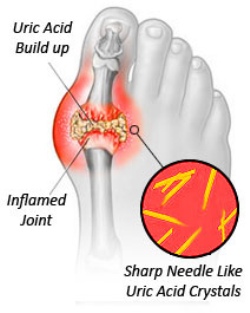 What causes gout? Gout is a joint disorder (arthritis) characterized by sudden and severe attacks of joint pain, tenderness, and redness, often involving the base of the big toe. However, it can also affect the ankles, knees, wrists, and hands. The pain is usually most severe in the first 12 to 24 hours, which is followed by a few days or weeks of discomfort in the involved joint.

Gout is characterized by the accumulation of urate crystals in the joint, causing inflammation and severe pain. Urate crystals form when uric acid levels in the blood increase beyond normal levels. Uric acid is a normal by-product of metabolism, which usually passes out in the urine. When the body produces too much uric acid or fails to eliminate it through the urine, uric acid levels can build up and crystallize to form needle-like structures. When these surround the joints, inflammation, swelling and intense pain occur.

Consult a doctor if you experience:

It is important to see a doctor even if the pain subsides because uric acid deposited on the joint can cause serious damage. Treatment includes medicines that can prevent future attacks and reverse uric acid buildup.

What Are the Treatments for Gout?

Since you have known what causes gout, you should work on how to get rid of it with the methods.

Medications used to treat gout are used for acute attacks and for preventing future attacks. They may also reduce the risk of complications, such as the formation of tophi from the urate crystal deposition.

Medications used to prevent complications from gout include:

Apple cider vinegar is a popular treatment for headache and acidic stomach, but it also helps relieve gout pain. Combine 1 teaspoon (or up to 2 tablespoons) of apple cider vinegar to a glass of water and take 2 to 3 times a day.

There are various ways to use ginger root, which is known for its anti-inflammatory properties. You can drink it twice daily with equal amounts of turmeric powder and fenugreek powder, dissolved in warm water. Or, make ginger root tea and drink at least once a day. Others add ginger root to their recipes, eat small pieces of raw ginger root daily, or apply a paste made from ginger root and water on the affected joint once daily.

Cherries contain anthocyanins, which have antioxidant properties that can help reduce inflammation and minimize flare-ups. Eat 15 to 20 pieces of cherries or drink black cherry juice daily.

Epsom salt is rich in magnesium, which can help improve your heart and lower your high blood pressure. Soaking painful body parts in warm water with two cups of Epsom salt relaxes the muscles and relieves pain. You can do this once a week, but for severe pain, you can do it twice or thrice a week.

Activated charcoal absorbs uric acid and taking a charcoal bath twice or thrice a week can relieve pain. To prepare your bath, prepare a paste from charcoal powder and water, and add water for soaking the affected body parts. You can also apply the paste directly over the affected joint. An alternative treatment is to take activated charcoal capsules as oral treatment, after consulting with your doctor.

How to Prevent Gout

Knowing what causes gout and how to treat gout is good, but the best thing is to prevent it before head.

Try to drink 8 to 16 cups (2 to 4 liters) of fluids daily, at least half of which should be water. Limit sweetened beverages.

Avoid eating foods that are high in purine and protein, as well as alcohol. Here are some suggestions:

Watch a video to know more about gout diet: