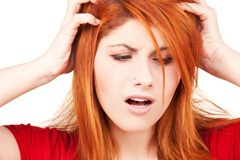 Itchiness of the scalp is very common to everybody from children to adults. It is an inflammatory response in the skin covering the head. The presence of several factors may cause scalp irritation or itching, like being exposed to a dry or polluted environment, helmet itch, poor condition of hair follicles, and genes. Such root causes can be relieved by simple home remedies, while there are some medical causes of severe itchy scalp which need special attention and treated properly with OTC or prescribed medicines.

Itchy scalp may be a result of several skin conditions, which may be mild, like dandruff, or it could be more serious or severe such as allergies, autoimmune disorders, infection, parasite infestation and inflammation. It is important for people suffering from itchy scalp to have an idea of the causes of itchiness so that professional or medical care may be sought immediately. Follow the instructions of doctors or labels.

Infestation of head lice is very common especially among children, which is caused by pedicels humanus capitis or the head louse. They feed and live on blood from the scalp. The head lice can be easily spread by close contact with other people but is also easy to remove. The head lice while feeding inject saliva into the scalp resulting to an itchy scalp.

Uncontrollable scratching of an itchy skin causes neurodermatitis, a skin condition also called lichen simplex chronicus. Scratching makes the skin area itchier. This chronic itch-scratch cycle causes hyperpigmentation (darkening of color) and scarring of the skin. This condition may be brought about by some nerve stimulation that irritates the skin. Stress can likewise be a triggering factor. Moreover, people with skin allergies and similar conditions have higher risk of acquiring this condition.

Treatment. Treatment of neurodermatitis is similar to other skin conditions such as applying corticosteroid ointments and creams to reduce inflammation. Antihistamines may be prescribed to control itching. If an infection occurs because of constant scratching, doctors may prescribe antibiotics as well. If neurodermatitis is triggered by anxiety, doctors may prescribe drugs to control or reduce anxiety.

Tinea capitis is a fungal infection affecting the scalp, caused by fungi called dermatophytes. Symptoms include small patches that appear bald. These patches are itchy and may become inflamed and red when scratched. This fungal infection is contagious and may spread to another person through contact with the belongings of the infected person. Sweating may also result to tinea capitis as the fungi thrive in moist and warm environment.

Treatment. Treatment for tinea capitis may include medicated shampoos that contain antifungal drugs like ketoconazole. This may be the initial treatment. Antifungals may be taken orally as well. Fluconazole, griseofulvin, itraconazole and terbinafine are normally used to treat the infection.

Pityriasis amiantacea, also called tinea amiantacea, is a condition of the scalp characterized by the presence of thick scales that are either yellowish or white. The scales adhere to the hair and scalp. These scales are very difficult to remove. This condition appears as complication of other conditions such as atopic dermatitis, psoriasis, tinea capitis or seborrhoeic dermatitis.

Treatment. Medicated shampoos are used if the cause is fungal infection. Normally, these shampoos may contain coal tar or salicylic acid or even antifungal drugs as the main ingredient. When fungal or bacterial infection appears, oral medications are administered such as antifungals or antibiotics. Topical corticosteroids may be used as well, as this cream or ointment can be applied to various inflammations.

Psoriasis is brought about by excessive build up of skin cells forming scaly, red patches on the skin. This condition may be hereditary. The formed patches can cause severe itching and scratching it may lead to an infection and burning sensation.

Treatment. Treatment of psoriasis in the scalp may involve medication that may be applied or taken orally. Applied medication may include medicated shampoos and creams where the main ingredients are calcipotriene, tazarotene salicylic acid and coal tar. Oral medication may include steroids, retinoids, monoclonal antibodies, methotrexate and cyclosporine.

Scalp dermatitis may be brought about by skin contact to some irritants and allergens causing an allergic reaction or skin irritation. Examples of these irritants are shampoos, cosmetics, perfumes, several chemicals and cosmetics. Some objects may trigger scalp dermatitis as well such as helmets. Hair dyes may also cause allergy to any person. People with scalp dermatitis experience skin itch and becomes red due to scratching. The symptom normally disappears upon removal of the allergen and irritation subsides.

Treatment. Treatment of scalp dermatitis may include topical corticosteroid that is applied to the flare that has not subsided. Otherwise, the flare may just self-subside. Exposure to known allergens or irritants should likewise be avoided.

Seborrheic dermatitis may be due to excessive oil in the scalp or it may run in the family. A fungus called Malassezia furfur causes majority of this condition. Other factors that may trigger this condition are stress, season change, HIV infection and some neurological conditions. Symptoms of seborrheic dermatitis include skin itches that may become reddish because of inflammation. Scaly, silvery-while plaques are formed on the scalp. The term used for this condition that affects infants is cradle cap.

Treatment. Antifungal drugs such as ciclopirox and ketoconazole may be used, which comes in the form of medicated shampoo to control skin cell proliferation. When there is widespread infection, antifungals are taken orally. Steroids like betamethasone hydrocortisone desonide are used to suppress inflammation. Immune suppressors such as pimecrolimus and tacrolimus are prescribed under severe cases to lessen inflammation.

Atopic dermatitis is most common to children. People with atopic dermatitis are more sensitive compared with other people. Exposure to environmental factors can cause some skin reactions like an allergy or inflammation of the skin. Symptoms include flaky and very itchy skin. The itching just worsens the condition.

Treatment. Treatment of atopic dermatitis may involve use of a variety of drugs or medication. The main goal is to treat the immune system and reduce skin reactions. Topical medication such as ointments or creams that contain antibiotics, calcineurin, corticosteroids, and inhibitors may be applied on the affected area. Oral medications may be taken as well, such as oral antihistamines or antibiotics.

Too much exposure to sunlight is the cause of actinic keratosis. People with fair skin are the ones often affected by this condition. Red, rough patches on the skin can develop on the scalp and other exposed areas. It is important to consult a doctor immediately as soon as these patches start to itch, as this may later develop to skin cancer.

Treatment. Treatment of growth may be removed using chemical methods such as chemical peels and creams that contain imiquimod or 5-FU (5-fluorouracil). In addition, there are physical ways of removing the growth such as curettage, cryotherapy, dermabrasion and photodynamic therapy. Certain ointments and creams can also be used to kill the cells.

Hard lumps in small sizes on the areas of the skin characterize prurigo nodularis or PN. These lumps are very itchy. Just like neurodermatitis, the chronic cycle of itching and scratching can cause skin damage. People with skin allergies have higher risk of having PN. Factors that may trigger PN are iron deficiency, HIV, renal disease and other allergic conditions.

Treatment. Treatment of PN is difficult as there is no permanent cure to control this condition. Symptomatic treatments include topical corticosteroids like methylprednisolone or mometasone, calcineurin inhibitors such as tacrolimus and similar drugs, antihistamines such as clemastine, loratadine, azelastine, hydroxyzine, desloratadine and levocetirizine are given to control allergic reaction, cyclosporine, antidepressants, thalidomide, naltrexone, capsaicin, menthol, vitamin D analogues and N-palmitoylethanolamine (PEA).

There are no known causes for discoid lupus erythematosus or DLE. This skin condition is chronic that appears as scaly, red patches on the skin. The sides of the patches are deeper in color. DLE develops on areas that are exposed to sunlight. It is possible that individuals with SLE (systemic lupus erythematosus) may develop DLE but not all who have DLE have SLE.

Treatment. Treatment for DLE may include application of topical corticosteroids on the affected area, drugs that will modulate the immune system, laser therapy to remove the lesions, antimalaria drugs have been found to be effective except for smokers, including quinacrine, hydroxychloroquine and chloroquine.

Treatment. Treatment of skin cancer will depend on the cancer stage. Treatment may involve surgery, radiation therapy and photodynamic therapy.