Functions of the Cardiovascular System | Healthcare-Online

Functions of the Cardiovascular System 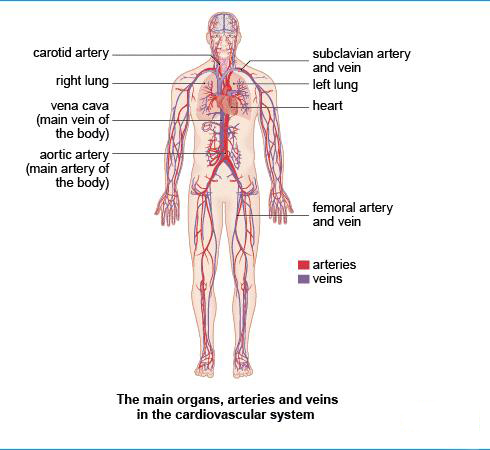 How does it work? The heart pumps about 10 pints of blood through the body with very beat. That blood travels through a complex system of arteries, veins and capillaries. The blood carries oxygen and nutrients to every cell of the body. The cardiovascular system is actually comprised of two systems: The pulmonary circulation, in which the heart pumps the blood to your lungs and back again, and the circulatory system, in which the heart pumps the oxygen-rich blood to the rest of the body.

Major Functions of the Cardiovascular System

Picture a major highway. Now, picture the small roads that branch off that major highway, the ones that lead to small town. Now picture even more roads, those that lead to small neighborhoods. Then add in more roads - the driveways that lead to houses. This system of transportation is the same kind of system that makes up the cardiovascular system. All those "roads" are veins, arteries and capillaries that carry the blood from the major artery all the way out to the small capillaries.

The heart works with the lungs to take oxygen to the farthest reaches of your body and exhale the carbon dioxide that has built up in the cells. The blood also carries nutrients, hormones, waste products and sometimes medications through the body. This is all a seamless transportation system that happens without any thought at all on your part. Your body works like a well-oiled machine through the functions of the cardiovascular system.

Blood cells are made up of three parts, and each part has a job to do when it comes to protecting your body from infection or illness. Here's how it all breaks down:

In order to stay healthy and work at the optimum level, your body must keep a nearly constant temperature. Though the optimum temperature can vary from one person to another, for most it lies between 97 and 99 degrees Fahrenheit. The cardiovascular system helps regulate the temperature with the following:

Balancing the fluids in the body means that every cell gets the proper amount of electrolytes, nutrients and gases. When you are dehydrated or when you have far too much fluid in your body, your cardiovascular system knows by the changes in blood volume. To compensate, your body then triggers hormones that target certain functions, such as increasing urine output or kidney function. Your blood vessels might also constrict or expand, thus allowing more or less of the body's fluids to be lost through sweat.

The functions of the cardiovascular system happen involuntarily, creating a complex web of actions that help keep your body as healthy as it can be.