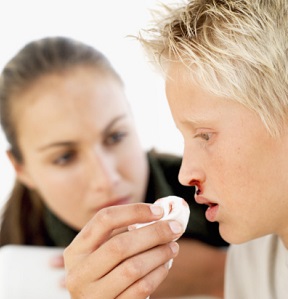 Although perhaps scary, nosebleeds are common and rarely indicate a serious medical problem. There are many blood vessels in the nose that are close to the surface, which are quite fragile and easily bleed. Nosebleeds are commonly seen in adults and children between the ages of 3 and 10. There are 2 types of nosebleeds - an anterior nosebleed happening when the front blood vessels break and bleed, while a posterior nosebleed happening in the deepest part or back of the nose.

Most commonly, frequent nosebleeds happen at the front of the nose. Common nose bleed causes include:

– Decongestants, antihistamines and medicated nasal sprays which dry the tissue of the sinuses and nose.

Nosebleeds which are recurring can also be caused by:

How to Deal With Frequent Nosebleeds

Frequent nosebleeds can cause light-headedness, dizziness, fainting and confusion. Therefore it is important to learn how to treat frequent nosebleeds. Many still try leaning back, pinching the bridge of the nose, putting ice on the bride of the nose or just letting it bleed until it stops on its own. With these steps, however, it isn’t uncommon to see the nosebleed last for 45 minutes or more.

With your next nosebleed, you’ll have better luck if you try:

If you want to know how to deal with nosebleeds weather it's due to a trauma or not, check out the video below:

Most nosebleeds, even frequent nosebleeds, are not serious and will stop on their own or by taking steps of your own to stop it. But seek professional care from your doctor if your nosebleed:

Do not drive yourself to the emergency room if there is a lot of blood loss. Call 911 or a local emergency number so someone else can drive you.

Speak with your doctor if you are experiencing frequent nosebleeds, even if they can be stopped pretty easily. You need to figure out what cause it in the first place.

How to Prevent Nosebleeds

There are several things you can do to prevent nosebleeds in the future, including: