Things About Blighted Ovum Miscarriage That You Should Know | Healthcare-Online

Things About Blighted Ovum Miscarriage That You Should Know

A blighted ovum happens when the fertilized egg does not develop into an embryo after it has been implanted into the uterus. Such a condition is also referred to as a no embryo pregnancy, and is one of the most common causes of a miscarriage. This condition occurs early in the pregnancy, and in fact, some people may not even realize they were pregnant before having the miscarriage. 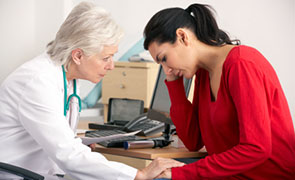 A blighted ovum occurs because of chromosomal errors. Chromosomes are the biological structures that carry the genes, and errors may occur due to pre-existing faults in the genetic makeup of the parents. In this condition, your body recognizes this error and ends the pregnancy.

You may blame yourself for the miscarriage; however, it is important to know that you could do nothing to prevent this from happening.

The symptoms of blighted ovum are almost the same as a normal pregnancy. The body continues to release many of the pregnancy hormones and has many changes.

A few things point to a blighted ovum, though:

How Is It Diagnosed?

The only way to diagnose a blighted ovum miscarriage is through an ultrasound which is able to see inside the amniotic sac. If this ultrasound is taken early in the pregnancy, say about 5 weeks, then it can be considered normal to not spot the tiny developing embryo, so the doctor may ask you to come back for a follow-up a few weeks later before confirming this diagnosis.

What Will Happen If Blighted Ovum Is Diagnosed?

Once the diagnosis of blighted ovum has been confirmed, the pregnancy has to be terminated. There are several ways that this can be done, based on various factors.

How Will It Affect My Odds of Conceiving Again?

A blighted ovum may be devastating, but it commonly does not have any side effects on future pregnancies. However, it is still important to speak to your doctor before you plan for your next pregnancy. Most doctors will recommend you to wait for at least three cycles before trying again.

The rate of conception and successfully completing a pregnancy subsequent to a blighted ovum is the same with that of other unaffected women. In case, however, there are incidents of repeated blighted ovum miscarriages, an underlying genetic disorder could be the cause and more tests should be performed.

Take Care of Yourself After Blighted Ovum

When Should You Call for Help?

Do not hesitate to call the emergency services if you:

You should get in touch with your doctor as soon as possible if you: